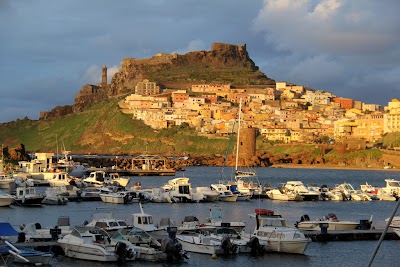 Arriving at Sardinia:
It was about 1am when we spotted the first lights of the island. The captain was sent to bed for a 3 hour sleep and I took on the watch. It is amazing how quickly you lose the confidence that you have built up over the last season! Suddenly I was doubting every bit of knowledge I have… a dangerous state to be in …boating is a bit like biking …you have to be decisive and make quick and clear decisions and then stick to it! With a huge 500m passenger liner approaching us on a collision course, I just could not make up my mind which side she is going to pass us…I got the colours right and then doubt it and in the end made the decision to turn towards her! OMW! Poor skipper probably knew to give me the benefit of the doubt! (being tired girl and blond – although I pay for my blond!) He stopped dead in his tracks and waited for us to manoeuvre around them! It was pretty embarrassing … even to admit it on the blog is …but I thought it might give other seasonal cruisers the time to rethink before they hit the waters again… I know it sounds straight forward to know these things, but it is good idea to verbally go through drills and rules of the road at sea together after having been out of it for a while… it might just save you a lot of money , angst and more importantly lives!
Our first port of call in Sardinia is Castelsardo in the bay of Asinara on the northern part of Sardinia. We hit the fuel dock first – after having to motor all the way from Denia, we were running pretty low on fuel and in the Med there are very little guarantees that you will have just enough wind from the right direction to hoist a sail! In fact – pretty much the opposite is true. The wind is either too rough or too weak and hardly ever from the right direction! So fuel is gold!
We managed to get a birth right in the middle of the marina! Two hours after we’ve arrived, the wind started picking up and was bitterly cold! We were very happy to secure the boat well, button up and take a stroll into town …trying to find out about internet access or sim cards and of cause to see the town!

The first thing before we left we had to buy a flag of Sardinia (The Flag of the four Moors) and was very surprised to see the design and learn about the history behind it! The flag is described as “white field with a red cross and a bandaged Moor’s head – forehead facing away from the luff [to the right] in each quarter”.
According to the Spanish tradition, it was a creation of King Peter I of Aragon, celebrating his victory at the Battle of Alcoraz in 1096. It was said that St. George miraculously appeared on the field of battle and that there were four severed heads of Saracen kings at the end; thus the red cross and white background of the St George’s Cross and the heads of four Moors. On the original flag the moors were blindfolded but to be politically correct in 1999, the blindfolds were changed into bandanas around the heads! Lol!

Catelsardo:
A small town with a 500-600 population makes a pretty picture as you approach it form the bay, with the lovely castle on the hill and the town spreading out from the top of the hill to the valley. The architecture is pretty uninspiring but the small shops and restaurants and coffee shops give it a nice atmosphere. It sounds like every other Italian thinks he can make a living from a restaurant / coffee shop/ bars . Maybe they can, and fair enough it is not high season yet … but it is pretty quiet and we felt obliged to support them! Being freezing cold, the coffees were flowing!
We enjoyed the walk up the castle hill (lovely spring flowers all the way up to the top! and the view is just to die for!). We were pretty disappointed that we could not get inside (siesta time again!!! Closed from 1-3pm! We just could not wait for 2 hours in wind and weather ! And needed a good rest/ siesta ourselves anyway!
We’ve decided to catch the bus the next day in to Sassari (a much larger town/small city) nearby to get a sim card for the IPads in order to download weather, emails and doing some blogging!… it will also give us an opportunity to see the surrounding areas and towns.
By the time we arrive back at the boat the wind has picked up quite a bit – Blowing probably 10-15 knots by now. We were lucky enough to have a really good grocery store 50 meters from the boat and did not need to go anywhere but stay aboard and have warm freshly made seafood chowder and a glass of port!

The road to Sassari :
Johann almost enforced the bad idea of sending me to Sassari on my own to get the internet sorted while he stayed at the boat, making sure everything is fine. The wind was fluky and increased in intensity. After some more lines and springers to secure that Scolamanzi does not go walk-about, we both left with the bus, dressed in all our warm clothes in layers to withstand the full 12 degrees of the very crisp morning. The wind factor is not yet calculated into that massive figure!
The vegetation along the way reminded us of “fynbos” – the typical plants and flowers you will find in the Western Cape in South Africa – I almost feel I was driving on the road between Onrusrivier and Hermanus in the Western Cape! … the only difference is that there were some olive groves along the way which you would not find in that part of South Africa!! The two little towns in between had similar buildings that you would find in the old HentiesBay or Walvisbay in Namibia … plane and painted in subtle pastel colours- so we felt as if we know this place!
Sassari is certainly a much bigger place that we expected it to be! It is the second-largest of Sardinia in terms of population with over 130,000 inhabitants, or about 275,000 including the metropolitan area and one of the oldest cities on the island too.
We found our data sim cards in no time and had a whole morning to explore the old part of the city! The beautiful Cathedral of St. Nicholas (with a lovely baroque style façade) was unfortunately closed until 5.30pm – we did not want to stay too long and gave that a miss. As soon as siesta strikes we found a restaurant with free Wi-Fi and sat down for an extended lunch! We learned that Sassari has a very rich and interesting history with Pirates and political corruption and being one of the oldest cities in Sardinia, it has plenty to see … prehistoric step pyramid of Monte d’Accoddi and lots of old valuable arts…but time is running out, and we will have to leave something for next time (or our next lives!)
It is Sunday morning! We stayed in bed till 9am and decided not to go anywhere today – today is computer and internet catch-up time…seeing that it is a massive 6 degrees outside and probably 3 degrees with the wind factor! How we are going to fill up the water tanks in this weather without getting frostbite or blown off the deck (30 knots of wind howling outside!) I don’t know …hopefully tomorrow will be a sunny windless day again? You never know when to trust the weatherman … but I would like to think he is right this time!
A few of the following pictures of our trip to Sassari was taken from the bus and not of the best quality … but you will get the feel of the place…

One thought on “Arriving in Sardinia – First Port of call… Castelsardo”