The island of Mljet is one of the loveliest and most densely wooded islands in the Adriatic. A part of the island has been declared a national park and they stop logging in 1400’s. Ulysses, Homer and St Paul stayed here for extended periods. Such is the beauty of the place!

The main attractions are two salt-water lakes – literally called Great/ Big Lake(Veliko Jezero )and Little Lake(Malo Jezero). We have been to Polace (the small village with a large protected bay), in the National park 3 times! And every time we’ve discovered and done something different!

It is the largest and the safest bay on the whole Island, as it is secluded and sheltered by 4 small islands Tajnik, Moracnik, Ovrata and Kobrava. Because of its sheltered position, Polace is very popular bay among sailors to anchor out there. A small fee will be collected from the National Parks Authority if you do anchor there but is worth every cent.

Polace has a number of ancient ruins dating from the 1st to the 6th centuries. The most significant ruin is the Roman palace from 5th century that is dominating the little village with its high cylindrical walls – hence the name “Polace” (meaning palace).This is one of the largest buildings in Dalmatia from the Roman period.

The first time round, we arrived at the bay in a beautiful sunny clear day, but still really cold! The reflection of the town’s buildings …all of them on the shore of the bay in one long street, strewn with restaurants with their own dock facilities and holiday units. The latter are disguised in lovely typically sandstone upright double story buildings, with the restaurant at the bottom, the owner of the konoba (or family restaurant) on the first level and a few apartments (“Apartman” ) on the top.
There is only one shop for basic provisions that doubles up as the bakery. The small village has just over one hundred permanent inhabitants but probably a dozen odd restaurants! All restaurants are right on the water with a wonderful atmosphere and menu! Each of them will have their dedicated fishing boats that will go out early in the morning and come back before sunset with the fresh fish for the night’s menu!


We sailed with spinnaker all the way to Polace the first time round. One of the first nice sails we had in the windless days in Croatia! On the first night we were lucky enough to meet Mike and Sue from the yacht Skedaddle Again. A lovely Australian couple (Mike a retired GP from Sydney and Sue a marine Biologist form the University of Sydney and had a lovely night of drinks and pot-luck food on board Scolamanzi! They have been to the lakes and were very impressed, so we’ve decided to come back another time to explore all of that.

The second time was with friends of ours from South Africa, Yvonne, her sister Gayle and son Quinton. Well, we took the adventures walk on to go across the island (a pretty big walk if you have been told that it is an easy 2km walk only) – it was more likely a 7km walk or more!(We later discover that the ticket to visit the monastery actually also a return trip on the bus! That is if you don’t want to walk that far!)

The stroll along the edge of the lake to the pick-up point was pretty interesting on its own! The information told us it is a 20-30 min walk …well we trusted her and took our time. We past some beautiful sceneries and I stopped at every one of them to take pictures! There is absolutely no indications of where the ferry point is, which made us ask for directions. Our resource stated it is only 500m further on … tell you what – they have no conception of distance! It was more likely 1.5 km further and we had to put in a serious jog when we see the ferry arriving in a distance to make the it (just!) in time!
The ferry took us around on the Great Lake for the visit to the 12th-century Benedictine Monastery that is located on a small island in the middle of the lake. Beautiful!
The monastery was disbanded in 1809 during the rule of Napoleon . It later became the forestry office when Austria took over the island. The building was owned by the Ragusa (Dubrovnik) Bishopric between the two world wars and was transformed into a hotel in 1960. It only returned to the Bishopric again recently (1998) with extensive restorations still going on.


The two lakes used to be fresh water lakes, but in order to ease their transport problems to the monastery, the monks dug a channel to the south coast, from the lake Veliko Jezero, thus turning both fresh-water lakes into seawater-based ones.
We have been wondering all along why there are hardly any bird life? Seeing that it is a national park with lovely forests. We later discovered the reason for it. Small Asian mongooses were introduced onto the island in the early 1900’s to reduce the venomous snake population which apparently became a massive problem on the island. Although the mongooses managed to get rid of the snake problem, they also killed off pretty much all the birdlife of the island.
With the ferry turnaround time of about an hour and a half and being the last ferry trip of the day, we started straight away investigating every angle of the island and monastery. Strolling around the edges of the islet took us once again back to ancient times with a lovely little church to find more peace and history!
We had a (quick) beer at the monastery – the setting was too good not to, but it was cut short by our ferry-man in his Dolce Cabana jeans. If he says he leaves at 5.10pm … it is not a lie… not a second later and he had the ropes undone and off we went! Make sure you are ready to go 10 min prior to the time – unless you want to miss the ferry on porpoise! We had to make a dash for the boat to make it back to the main island!
The lake’s water has a beautiful clear, unpolluted and a wonderful blue colour to it! Apparently the best coral and fish in Croatia will be found in this lake.
The third time we came to Polace was with Rosemary (Johann’s mum from South Africa) and her friend Cal from Canada.
We anchored a bit deeper into the same bay … with the lovely forests on our door step. The blue water is now becoming a real invite, with the days that became much clearer and warmer! We the Rose and Cal off in town to take the bus to the lakes and we had a wonderful lazy time on the boat with our first refreshing swim with masses of fish joining us! Well, I did voluntary but Johann had to dive in to try and find a part from the winch on the davit that accidentally fell in while doing some maintenance. Needless to say the 10 metre depth was a problem in recovering the little metal piece without diving gear. A painful eardrum later he gave up on it.

That night we went to the restaurant next to the Ruins of the Roman palace! What a night! We once again had a wild boar stew and it was delicious!! It took me back to Radda (Tuscany) when I was there last year and earlier this season in Stari Grad where we had the same dish with Yvonne, Quinton and Gayle! The setting was just the compliment the great food and local Posip white wine (the best we had so far in Croatia!) needed to make it a perfect night! Arriving back at the boat, the village lights on the still water made for some more wonderful photography!

It is a windless beautiful morning as I am typing this blog … 5 am … the sun not quite up over the hills, but just enough light to show the perfect reflections of the village and yachts on the glassy clear water! A fabulous picture to etch into my mind of this beautiful bay full of memories! 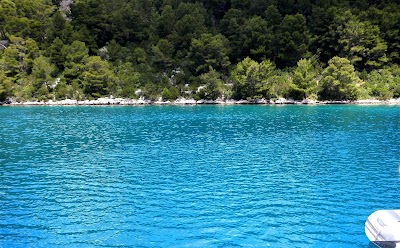