My first impression from the boat was that it’s just another cute little town up against a hilly island … until we got off and walked around … it is more than that! There is a lot of natural beauty about it, most of the houses and alleyways are authentic and old … But there is a component of artificiality in it that just did not match up with the beauty of this lovely remote island in the bluest of waters! Strangely enough … somehow it works!

What sticks to our minds are the amazing nature! Enormous high cliffs edging the island surrounded by the most pristine blue water. The famous Grotta Azzurra or Blue Grotto (a sea cave that is flooded with a brilliant blue light) as well as the Faraglioni (three massive pointy rocks just off the coast) are just a few of the icons of this beautiful island.
Thinking of the isle of Capri, will always bring back flashes of romantic gardens, lookouts, and alleyways that is beautifully paved, leading to secretive interesting entrances to private dwellings all over the island. The flower gardens are magnificent and the soil must be extremely fertile judged by the vegetation, the quality and size of their lemons and fresh fruit and flowers! The tulips are huge and every entrance or windowsill is decorated with a colourful array of flowers!… The most impressive walkway I have ever seen (paved too, mind you) is the Via Krupp … a long scenic walkway that was built in 1900-1902 from the top of the Krupp house and the Grand Hotel Quisisana, to the bay Marina Piccola, where Mr Krupp’s marine biology research vessel used to lay at anchor. Today it is a very popular walk with the beautiful view across enticing blue bays all the way to Marina Piccola.

I can certainly see why songs have been written about the island of Capri and why celebs would choose it to hide and relax here. We have stopped many times, taking in the breathtaking scene in front of us, and Johann will sigh with a: “I don’t think you will ever get old in a place like this, waking up every day with a view like this!” I had to agree!
An island that makes its own range of perfume (I had to get a bottle, chosen by Johann for me!!)…how romantic is that!? Someone once said: “Every man should at least go to the Isle of Capri once in his life!” We did…and I am glad this unforgettable, spur of the moment stop-over came about! It is worth going out of season – the amount of tourist then was already telling the story of a very popular destination. Cheap it isn’t – we paid a whopping €18 for a beer and a spritzer – but then again…it was on the Isle of Capri! 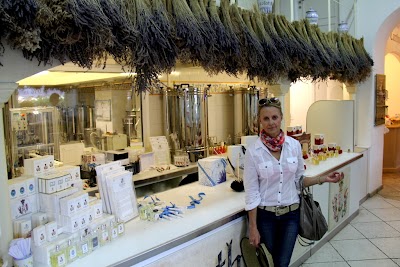 It was worth our short while to pay for a taxi – which also did not come cheap, but he took us everywhere and all around the island. We stopped at the best lookout points (for more pictures) and the cutest, almost exclusive little bays. We were left in one of these bays overlooking the Faraglioni , for lunch where we have had the most wonderful home-made pasta. It was a jam-packed feast of a day! We have seen a lot in one and a half days … but we need to come back: We have to swim in the blue grotto and we need to go up to the top on a nice clear day with the funicular!
Whenever we come back, I will buy the same perfume again and get much more than only one bottle of their famous Limoncello!!

Just before we started our day of travelling, Johann had the urge to wash the boat. Water was include in the horrendous fee we were charged and I am sure he is the first skipper and yacht owner to wash his own yacht in Marina Grande in Capri at 6:00 in the morning! I have to say … it always makes sailing a pleasure if you do it with a clean boat!