Sail … hmm not quite … we motor-sailed most of the way as we were struck with beautiful calm weather and glassy water again! When will this good luck run out we thought while racing for wood to touch (being on a glass fibre yacht!) The lovely sunset as we left the main land guided me into the night shift. Johann wants to be behind the wheel as soon as we arrive at the islands at daybreak.

The Aeolian Islands are a group of islands in the Tyrrhenian Sea about 25-50km north of Sicily in Italy. Lipari (the largest island), Vulcano, Salina, Stromboli, Filicudi, Alicudi, Panarea and Basiluzzo. All has evolved due to volcanic activities. 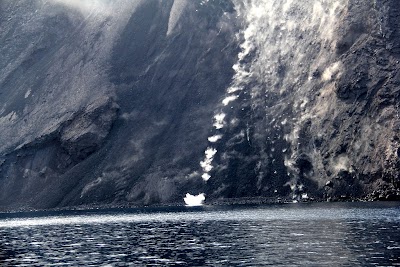 STROMBOLI would be the most spectacular as it is the only European volcano that has had continuous eruption for the past 2000 years! We have missed the last spectacular lava flow with a few weeks only! (1st of March 2013 according to the Volcanic Activity Report by Smithsonian) Eruptions from the summit craters typically result in a few short-lasting mild but energetic bursts ranging up to a few hundred meters in height containing ash, incandescent lava fragments and lithic blocks.

Long before we reached the islands, Johann could see the odd orange heated “flame” of Stromboli as it was still dark and not quite daybreak yet. Arriving at Stromboli that early in the morning we had the sun on the wrong side of the camera lens! So … unfortunately, most of the shots were over exposed, and even though it has been manually adjusted, it would have been spectacular pictures had it be in the afternoon.
Stromboli was our first experience of an active volcano! To hear it rumbling, rumbling and then the spew of ash and lava fragments and massive blocks of rock … was just another highlight! Nature is just spectacular no matter how you look at it! We watched it for over 2 hours and could get pretty close as well (about 100m from the shore line) – Close enough to have some dust blown on the deck and be able to see the smouldering rocks racing downhill into the cold sea water with a sizzling sound (exactly like hot iron touching water!) One could hear the build-up between eruptions … the cleaning of the throat sound changes into a suppressed roar getting angrier (sounding like a jet engine) and then the Puff! Stones flying up in the air, smoke hanging ready for the photographer … and then the rocks running down at a hell of a speed to plunge in the water. On the side of Stromboli is a “horse shoe “indent where the lava tend to flow down, which is called “Sciara del Fioco” meaning the Stream of Fire. Amazing melted iron-like river of lave!
The pictures tell some of the stories, but this as many other spectacular things in nature … is hard to describe or picture without having been there … there is a presence of this majestic angry volcano that reminds me of being in the presence of a lion or elephant and hear and feel their sounds … an earth trembling feeling that you can feel in your chest – something pictures never capture.. You just have to be there to know what I am on about!
Apparently, a must-see attraction is the night-time climb up to the crater. And then running down the volcanic ash slopes, in the dark! We luckily did not stayed enough to do that one!! 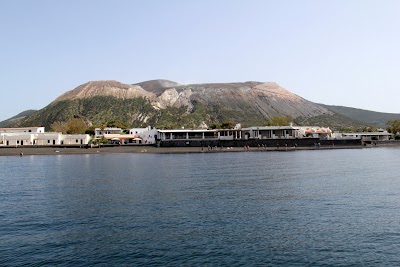 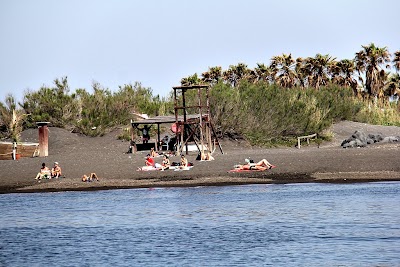 As we left Stromboli to go and secure an anchorage for the night ( there are not many options for protections against a North Westerly wind) we passed a few spectacular volcanic plugs before reaching the island Vulcano.
We have just settled in an anchorage on Volcano Island with a black beach in front of us and the still active “Gran Cratere“(crater) hissing sulphur fumes! Luckily we are upwind from it! On our way in, we past an Australian yacht, waved our arms off just to get a blank stare back! So that is it! Stuff waving from now on … (Not very original of the Italians to have the island on which the volcano is called Vulcano and to go and call the volcano, Vulcano! Figure that!) What you would see on the picture is only the plug of the volcano – we were anchored in the middle of the old crater. Amazing to think of the enormity of these volcanoes!

Gran Cratere is pretty spectacular from down the here. There’s a trail up to the sulphur springs. The people look like tiny dots at the top so it must me pretty high and very smelly!
The water is apparently nice and warm due to bubbles coming from the volcanic activity through the sea bed… not that I have tested it … there are way too many jellyfish (but beautiful and colourful ones!!) in the bay to my liking and it is still a slight chill in the air … I am happy to sit on the sideline! By the way – talking about good luck … We have only just missed a massive storm and have had the most wonderful weather all the way here! 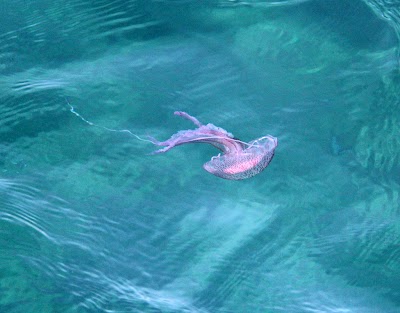 2 thoughts on “An overnight sail from Salerno to Stromboli and the Aeolian Islands:”